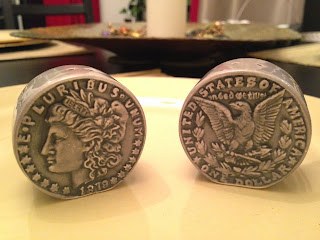 So I made a quick run to my local Cracker Barrel and scoured the gift shop until I found a set. They also come in Buffalo Head Nickel, Dime, and Penny denominations.

For 99 cents, every Coin Man out there should grab a set of these! Huge thanks to Robert Benedict!

Just today I have gotten so much great feedback about my Modern Coin Magic DVD set, that I decided to do something nice for everyone who hasn't picked it up yet. 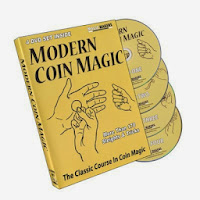 All this weekend go to the SalinasMagic online store and check out my Modern Coin 4-DVD Set and enter 'Bobo' as a discount code to get 50% off the retail price!

That's right, just $5 a disc for over 170 tricks, sleights, routines, and techniques! But only for this weekend, so hit it now!

Is that expanded shell going to get you a 6x8 cell?

Coin Magicians seem to spend half their lives altering coins for magical uses, and the other half trying to find someone to watch them do the trick with their new FrankenCoin.

The question always comes up, "Is is LEGAL to make a gimmicked magic coin?" I decided to do a little, hopefully definitive, research.

I found the answer while looking up law related to using coins for jewelry-making. The art world, not unlike the magic world seems to operate in a bit of a legal grey area. Activities that would get you jail-time if done for a commercial purpose are just fine, or at least the Treasury will look the other way, if the same activities are done as part of creative expression.

“Whoever fraudulently alters, defaces, mutilates, impairs, diminishes, falsifies, scales, or lightens any of the coins coined at the mints of the United States, or any foreign coins which are by law made current or are in actual use or circulation as money within the United States; or Whoever fraudulently possesses, passes, utters, publishes, or sells, or attempts to pass, utter, publish, or sell, or brings into the United States, any such coin, knowing the same to be altered, defaced, mutilated, impaired, diminished, falsified, scaled, or lightened— Shall be fined under this title or imprisoned not more than five years, or both.”

That pretty much says your ass is going to jail for making a Flipper Coin. But wait! That says "fraudulently alters..." So as long as you're not trying to buy some Twinkies (Mmmm, Twinkies) with your Super Triple Coin, the police are going to let you slide?

A question on the Treasury Department's FAQ asks whether it's legal "to use coins to make jewelry, souvenirs or other items?" The answer would make Bill Clinton proud, "Those coins are classified either as not current or as mutilated. The Mint redeems mutilated coins at the value of their metal content." 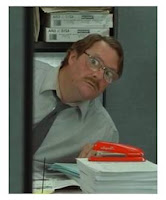 Finally, near the bottom of the page, we get a bit more of an answer:

“This statute means that you may be violating the law if you change the appearance of the coin and fraudulently represent it to be other than the altered coin that it is. As a matter of policy, the U.S. Mint does not promote coloring, plating or altering U.S. coinage: however, there are no sanctions against such activity absent fraudulent intent.”

So the answer is, well, about the clearest you're going to get from the government. But as long as they have cattle ranchers to harass and pipeline deals to stall, the government is too busy to bother with you trying to impress the Starbucks counter girl with your Dean's Set of Walking Liberties.

Our friends Dave and Craig at World Magic Shop have just announced a new coin magic DVD called Holy C.O.W. (Coin of Wildness). The advertising blurb says that this is all done with no gimmicks, just sleights. Which is very exciting for coin magic purists like me!

The trailer shows so very nice vanishes, productions, and changes along with some new handlings of coin classics. You'll see a very visual Spellbound, a one-at-a-time change of 4 coins, and a coins across. The DVD appears to be an extension of Chef Tsao's technique in his Arming System DVD, a move also used by Tristan Mory on his Metal Eclipse DVD. This move is pretty angle-sensitive and I'm curious to see if Chef Tsao has addressed this in the DVD.

Until I get it and can review it. Check out the trailer!

My two greatest loves in the world of performing are Coin Magic and Mentalism. An odd match to be sure, but I've discovered, and created, several effects of mentalism with coins.

This past weekend I had the awesome experience of attending the East Coast Mind Jam and meeting some of the country's foremost mind readers. I had a great time at the lectures and got to hang out with some pretty cool fellow attendees. One of them was John Sergott. 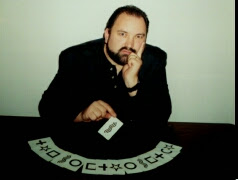 He's a fellow Pennsylvanian and lover of all things mental. John has allowed me to share a wonderful bit of impromptu Coin Mentalism with all of you.

With just a few coins (can be borrowed), something to write on (a business card!), and some fun interaction you can show off your stunning skills at precognition! Just click here to download John's Impromptu Mental Prediction.

A huge "Thank You" to John!

In the past 3 days I have performed Silver Swindle about 11 times and each time has been fantastic! The handling is so easy that I was able to expand from my original script and improve the final phase to make it stronger and more in keeping with the theme I am using.

Last night, after performing it for a friend, one of his co-workers who had been watching (and thought I was just guessing) asked me to do it for her. The effect was just as strong, perhaps a bit stronger, even when immediately repeated for the same crowd.

We're off to a formal function tonight, so I'll be sure to try it out a few more times.

If you love coins, and you want to add a STRONG bit of mentalism that you can perform almost immediately, then you need to pick this up.

Like most magicians I have always wanted to add a bit of mentalism into my performances. And I love coins. So, when I heard about Romanos' Silver Swindle from the guys at Vanishing Inc Magic, I knew I had to get it.

This is a 3-phase routine where you can consistently tell whether your volunteer is telling the truth or lying. She is given 2 coins of the same denomination. She initials one. Then, with your back turned, she chooses to keep one and put the other in your hand. At no time do you ever peek at the coin in your hand, yet you immediately know which coin she is holding. Each phase builds in mystery until the big finish in the 3rd phase, where you prove beyond a doubt that you know exactly what (and ‘how’) the spectator is thinking.

The DVD is well-shot with a demo, 2 performances, then a discussion of the effect by Andy Gladwin and Dave Forrest. They go over the included gimmick, the 3-phase routine, and some tips and alternates endings. They also discuss the reasons why the routine works and why it has even fooled other magicians.

Then there is the gimmick, but it’s really quite a stretch to call it that. It’s brilliant, it’s simple, it’s bold, it’s right in their face the entire time, but completely invisible. There is absolutely no fear of the volunteer ever finding how the coin is gimmicked. Managing the gimmick is child's play. There is really nothing to manage. You know immediately where each coin is, so you can concentrate on your presentation. And no worry about them burning your hands. They could even record your presentation and still never see any suspicious moves, because there are none!

The DVD cover says: No peeks No marks No magnets No stooges No electronics No chemicals

and all of it is definitely true. No creative wording here.

The routine is extremely easy to learn. I successfully performed it twice within 12 minutes of having watched the entire DVD. At just $25 this is a steal! A ready to go, professional routine that is easy to do, packs small, plays huge, and has a wonderful ending that brings the entire routine to strong finish. You need to get Silver Swindle by Romanos today!